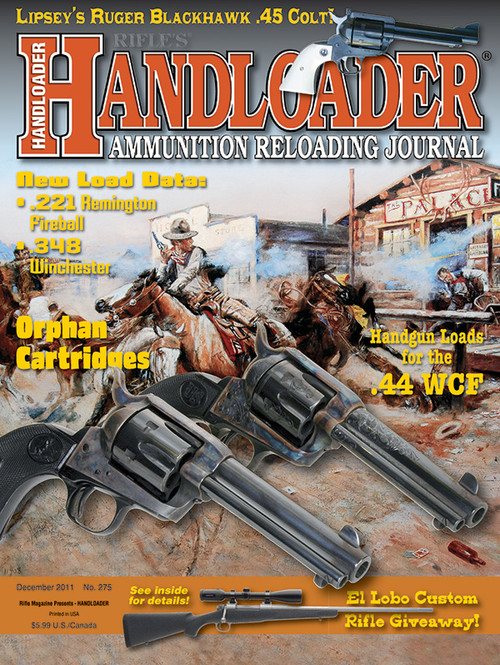 On the cover . . . A pair of single-action revolvers: one by Colt and another by U.S. Fire Arms, both with 43⁄4-inch barrels and chambered for the .44 WCF/.44-40. Photos by Yvonne Venturino. Background painting, Smoke of a “Forty-Five,” by Charles Marion Russell. This issue features: Utility Loads- Reloader’s Press by Dave Scovill, Case Splitting- Bullets & Brass by Brian Pearce, Alliant’s Unique- Propellant Profiles by R.H. VanDenburg, Jr., Handloading Circa 1927- Mike’s Shootin’ Shack by Mike Venturino, .500 Smith & Wesson Magnum- Cartridge Board by Gil Sengel, If This Gun Could Talk- Pistol Pointers by Charles E. Petty, Primer Pointers- From the Hip by Brian Pearce, .44 WCF in Handguns- Loads for Single-Action Revolvers by Mike Venturino, .221 Remington Fireball- A Small Cartridge That Could by John Haviland, Handloading Lipsey’s .45 Colt Ruger Blackhawk- The .45 Colt and .45 ACP on a Medium-Sized Frame by Brian Pearce and much more!