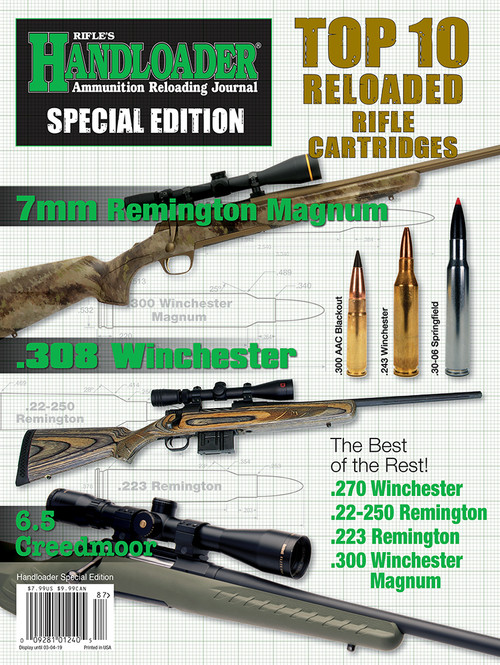 This special edition is available on NEWSTAND or DIRECT-ORDER ONLY!

Last year Handloader magazine published a special edition on the top 10 reloaded handgun cartridges. The top 10 list was based on reloading die sales for 2016. It was one of the most successful issues we published. This year, we decided to cover the top 10 reloaded rifle cartridges according to reloading die sales. Hornady, Lyman, RCBS, Lee and Redding were asked to give us the list of their top 20 rifle cartridge die sales. Their lists were received in mid-2017, and from that list came this special edition. We chose the best articles on these cartridges from Handloader magazine. Some additional content was also included, and for those cartridges we haven’t covered in a while, we had all-new material written with extensive reloading data. As with any “Top 10” list, your favorite cartridge may not have made the list. Remember that this list was based on reloading die sales in 2016-2017. Something I noticed was that many “popular” cartridges this year were on the list. As a result, the list may be skewed to these fairly new cartridges. A popular cartridge will see an increase in die sales while a cartridge that has been around for a while may not be on the list because everyone already has dies for that cartridge. What surprised me is that the .30-06 was on the list. Despite its longevity, die sales are still strong for that cartridge. We hope that you enjoy reading this issue as much as we enjoyed putting it together.
– Don Polacek